Raman spectroscopy is highly sensitive to the chemicals used in explosives and their precursors, making Raman the preferred choice for bomb squads and police around the world.

Serstech’s solutions have been designed and developed with the everyday challenges of bomb technicians and police in mind. The instruments can be operated even with heavy gloves and ChemDash provides all the information and tools needed for further analysis and reporting.

All Serstech’s instruments use 785 nm lasers, which create a much stronger Raman response than longer wavelengths, such as 1064 nm. Since the Raman response is stronger, the instruments can measure with a lower laser power and for a shorter time, which reduces the risk of igniting the sample and causing an explosion.

Serstech’s instruments have physically well-separated hardware buttons, which makes them easy to operate even with thick protective gear and gloves.  The displays have been carefully selected to provide high readability even in direct sunlight and in dark rooms.

All hazard information is displayed directly in the results screen and the users gets instant feedback on the properties and hazard information of the substance found. This limits the hazard and keeps the operator well informed to make decisions fast. 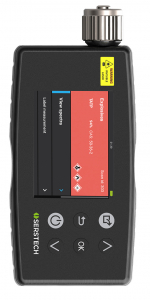 Serstech’s instruments are small and light, the smallest and lightest in the industry. The size and weight are important, since any instrument left in the truck is useless, regardless of how good it is. Despite of the small form-factor, all instruments have battery capacity to last a full working day.

Serstech 100 Indicator and Serstech Arx both have a standard USB port for connection to a computer. The same port is used for charging the internal battery and any off-the-shelf battery pack can be used to extend the battery life of the instruments and for charging it in the field, when a power outlet is far away.

Serstech 100 Indicator has a weight of 650 grams and Serstech Arx only 600 grams.

To ensure maximum performance and precision, Serstech develops its own libraries together with partners around the world. All libraries have been created with Serstech’s own instruments, ensuring perfect compatibility and removes the need to recalculate or transform the libraries, which is a quite common approach in the Raman industry.

Serstech works closely with Swedish Defence Research Agency, FOI, which manufactures explosives for Serstech. Serstech’s chemists spend a few days every quarter at FOI’s facilities to add new explosives, precursors and other relevant substances to its libraries. The libraries are enriched by Serstech staff and always include CAS numbers, GHS symbols and other information relevant for personnel in the field of lab.

Serstech holds a permit from the Swedish authorities to manufacture and export substances classified as war material, such as military explosives. Serstech’s explosives library includes military and civilian explosives as well as IED and precursors.

Due to the nature of explosive substances, it is often wise to take a small sample before an analysis is made. Serstech’s instrument has been designed to be able to identify very small amounts, even a single milligram. A single grain is often enough for identification, as can be shown in the image below.

Identification of a single grain of HMTD with the Serstech 100 Indicator.

Scroll to top
We use cookies on our website to give you the most relevant experience by remembering your preferences and repeat visits. By clicking “Accept All”, you consent to the use of ALL the cookies. However, you may visit "Cookie Settings" to provide a controlled consent.
Cookie SettingsAccept All
Manage consent

This website uses cookies to improve your experience while you navigate through the website. Out of these, the cookies that are categorized as necessary are stored on your browser as they are essential for the working of basic functionalities of the website. We also use third-party cookies that help us analyze and understand how you use this website. These cookies will be stored in your browser only with your consent. You also have the option to opt-out of these cookies. But opting out of some of these cookies may affect your browsing experience.
Necessary Always Enabled
Necessary cookies are absolutely essential for the website to function properly. These cookies ensure basic functionalities and security features of the website, anonymously.
Functional
Functional cookies help to perform certain functionalities like sharing the content of the website on social media platforms, collect feedbacks, and other third-party features.
Performance
Performance cookies are used to understand and analyze the key performance indexes of the website which helps in delivering a better user experience for the visitors.
Analytics
Analytical cookies are used to understand how visitors interact with the website. These cookies help provide information on metrics the number of visitors, bounce rate, traffic source, etc.
Advertisement
Advertisement cookies are used to provide visitors with relevant ads and marketing campaigns. These cookies track visitors across websites and collect information to provide customized ads.
Others
Other uncategorized cookies are those that are being analyzed and have not been classified into a category as yet.
SAVE & ACCEPT